National Park Village borders the dual World Heritage Tongariro National Park (Tongariro Crossing) to the east and the Whanganui National Park to the West, in the middle of a true wilderness wonderland.  The Village is located near the base of Mt Ruapehu, at the intersection of SH4 & SH47 on the volcanic plateau, half way between Auckland and Wellington.  It boasts great views of all three mountains, Mt Tongariro, Mt Ngauruhoe (Mt Doom in the Lord of the Rings filiming locations) and Mt Ruapehu -  a unique dual world heritage area, 300,000 years in the making.

50 Million Years Ago
New Zealand was once part of the sea floor, and was connected to Australia. Over time sand and silt eroded down the Gondwana land mass. This compacted and formed a sedimentary rock called graywacke.
​
250,000 Years Ago
Ruapehu was formed.  There were 4 different cones over different times.  The original cone was called Te Herenga, and has now mostly eroded away.

20,000 Years Ago
A lot of volcanic activity occurred from the vents of Tongariro and Proto-Ngauruhoe (a cone that existed where Ngauruhoe is today.)
​
CLIMATIC PROCESSES

Climate refers to the average weather conditions in an area over a long period of time.  The general pattern of climate in the Tongariro Volcanic Centre is varied depending on the altitude and the direction of the slope.

Altitude
Relief affects climate through altitude.
Air cools as it rises so at higher altitudes, air is colder.
This has implications for plant growth and soil temperatures.

THE EFFECT OF VOLCANIC ERUPTIONS ON VEGETATION
​
One of the major processes determining the pattern of vegetation is volcanic activity. This impact is both direct (through eruptions) and indirect (through the high alpine landforms produced by volcanic eruptions).
​
The Taupo eruption of 186AD had a significant impact on the vegetation of this area. The eruption destroyed most of the beech forest, as far south as Waiouru either by the blast or by the burning. The charred remains of the forests were buried under layers of white pumice.

Since the Taupo eruption the vegetation in the Tongariro Volcanic Centre has regenerated slowly. However, on the eastern and northern sides of Mt. Ruapehu the regeneration process is particularly slow due to lahar activity and stream deposition on the Rangipo Desert combined with volcanic ash-falls, falling most frequently here with prevailing south-westerly winds.

The southern sides of Pihanga, Hauhungatahi and Ruapehu were sheltered from the hot pyroclastic flow. Consequently these are the only parts of the Tongariro Volcanic Centre which have fully developed into mature native forest.

ASPECTS OF THE MOUNTAINS 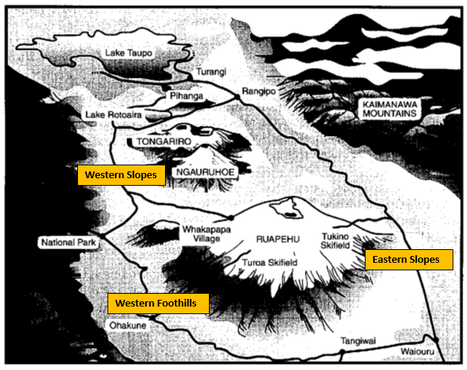 Eastern Slopes
The Rangipo Desert receives 1000 - 2000 mm of rainfall per year, but resembles a desert because of poor soil quality and drying winds.

Landforms - This is an area of gentle slopes.  There is evidence of ash deposits from when Ruapehu has erupted in the past and thick deposits of ignimbrite from the Taupo eruption.
WHY is this area so prone to ash deposits? - Prevailing westerly winds carry ash from eruptions to the Rangipo Desert.
WHY is this area prone to wind erosion? - The strong prevailing winds that come down from the Tama Saddle, and a lack of vegetation.
Vegetation - Tussock is a grass which has adapted to surviving in cold temperatures and winds of high altitudes.  On the slopes of mountains where eruptions have prevented the regrowth of forest, tussock grows.

Soil - The Rangipo desert has very poor soils. The topsoil is often blown away by the wind.  The lack of rain and stong wind means the soil hardens and plants struggle to grow.

Landforms - The Mangatepopo Valley was carved out by the Mangatepopo Glacier – it is a U shaped valley.  Moraines (glacial debris) line the valley (lateral moraines) from 14,000 years ago. The floor of the Mangetepopo Valley is gradually being covered with andesitic lava flows from Mt Ngauruhoe.
Pukekaikiore was active 190,000 – 120,000 years ago.  It was eroded and modified in the Ice Age by glaciers. It is on the southern side of the Mangatepopo Valley.
Pukeonake, a scoria cone, is 5.6km west of Ngauruhoe.  It is over 23000 years old.  Stream erosion and the draining of a crater lake has cut a steep gully inside the cone and the south west wall.  It is possible that glaciers also eroded away material.

Soil - Soils are very thin and lack basic nutrients.  Because of the heavy rainfall due to orographic rainfall (3000mm per year), leaching occurs.  This removes the nutrients. Soils are also thin due to steep slopes and the cold climate which makes breakdown of rock and vegetation slow. LEACHING - Loss of nutrients caused by the draining of water through the soil.
Vegetation - Because of volcanism, ice and water erosion is constantly modifying the land surface which makes it difficult for plants to survive.

Landscape - This is an area of gentle slopes.  Material is deposited here by glaciers in the ice age. It is also and area of deposition from volcanic eruptions (ash and lava flows).
Valleys have been carved out by rivers. The area also has moraines created by glaciers that flowed down slope of Ruapehu. Over time water has also carved out valleys and waterfalls over old lava flows.

Vegetation - This is an area of shrubland, swamps, Beech forest and Podocarp forest.
The climate, relief and soils here are suitable to support trees.  Trees need soils that are moderately deep and the flatter slopes of this area allow this. Podocarp forests extend up to 1000m above sea level – rimu, kahikatea, matai, miro. Beech Forest exists 1000-1200m above sea level.

Soil - This area has deep soil called yellow-brown pumice soils.  It is sandy, free-draining soils that easily erodes if the surface vegetation and thin topsoil are removed. Soils are affected by numerous eruptions making them immature. Eruptions also upset the pH of the soil making them acidic.